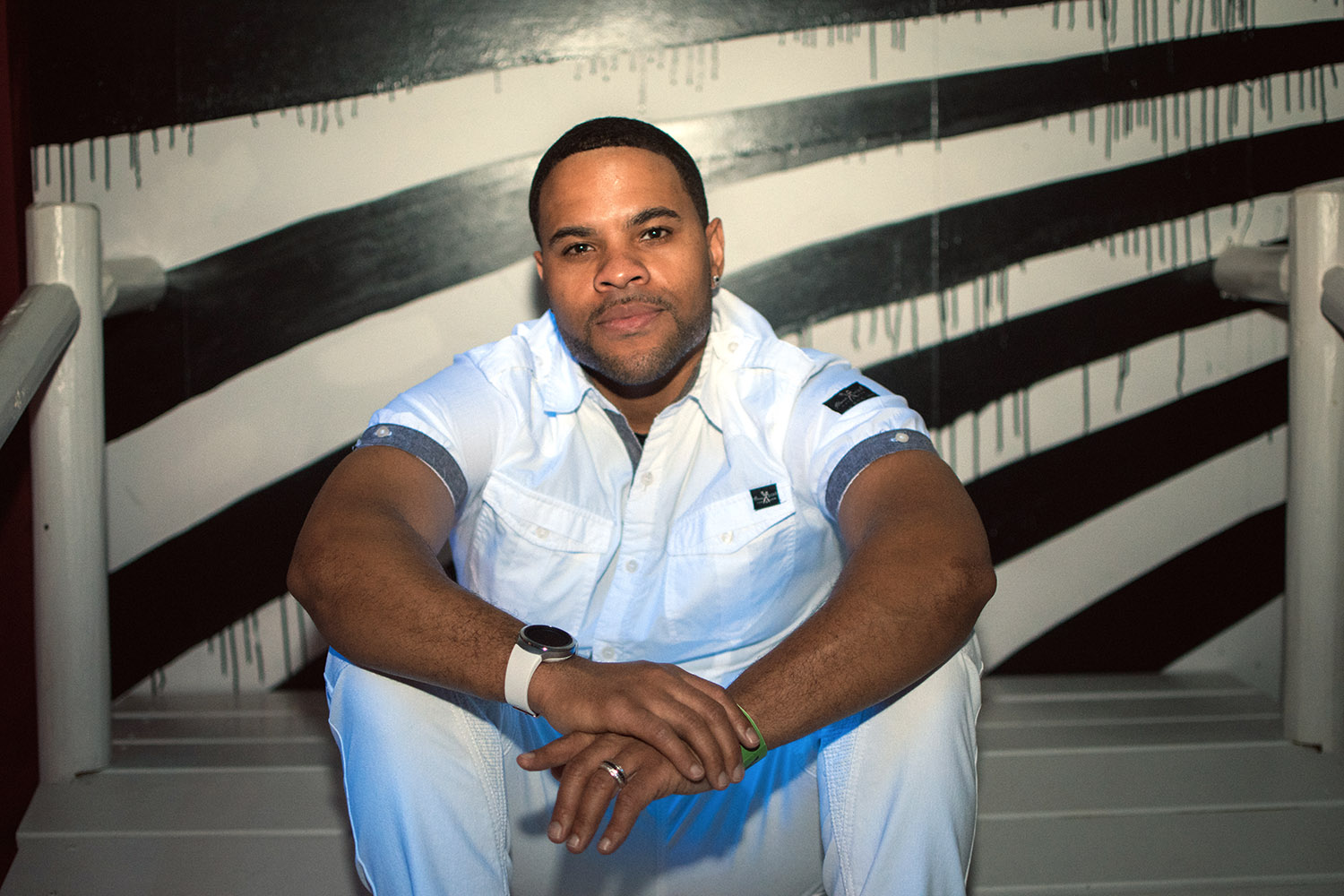 Ramone Javon Griffith, known professionally as RJ Griffith, is a singer-songwriter who is ready to use his powerful voice to touch the world by song. RJ grew up in Bellwood, IL, a suburb located 13 miles west of Chicago’s downtown Loop, and was thrown into the spotlight as a young child appearing in advertisements, commercials and even shared a role with his twin brother in the movie Hardball. Although he enjoyed those experiences and landed additional acting roles during his teen and college years, RJ soon realized that his singing voice was the reason he was selected for many of these roles and decided to shift his focus to improving as a vocalist. Inspired by the likes of Michael Jackson, James Brown, Luther Vandross and Jamie Foxx, RJ’s passion for singing earned him a collegiate choir scholarship to Saint Joseph’s College (Rensselaer, IN) and soon after, an invitation to perform in front of thousands of people each week at his church. RJ loved the feeling of performing and inspiring people through music, which before long motivated him to start creating and putting his own spin on positive upbeat music that everyone could enjoy.

RJ’s solo career officially began when he released his first ever project, an EP, titled Prey in October of 2016. Prey quickly earned praise from his peers and was recognized by multiple press outlets including Nonstop Radio, This is 50 and Sleeping Bag Studios. Sleeping Bag Studios reviewed the EP and had this to say after listening, “Griffith has found all kinds of ways to win through the innovative approach he takes to his material – I dig it!” The fourth song off of the EP, “Haunted By My Past,” was also selected to be in the independent film The Assumptions, which premiered on February 27, 2017 in Palm Springs, CA., and in 2019 the production team of the motion picture Canal Street, creatively collaborated with RJ on a music video for the third song off of the EP titled “God Bless Our Enemies.”

With the success of Prey, RJ didn’t keep his fans waiting long, releasing a three song Valentine’s Day love song EP titled Direction four months later. Direction was well-received, and soon after the release his voice caught the attention of National Recording Group, Zion’s Joy. In August of 2017 it became official, RJ joined Zion’s Joy as a lead tenor and toured with the group across the country while continuing to pursue his solo career; tour stops included Nashville, New Orleans, Dallas, Jacksonville and Indianapolis, highlighted by being selected to open for Deitrick Haddon and Jekalyn Carr in Baltimore. RJ also made his national television debut with Zion’s Joy on July 14, 2018 on the Huckabee Show, but has since taken a step back from the group to pursue his solo career.

Along with recently starting a 501(c)(3) nonprofit called Positive Vibes Only which serves primarily as an open mic for Chicagoland and Northwest Indiana youth, RJ debuted his new EP, A Good Day… on January 21, 2020. He unveiled the first single, the title track, “Good Day,” back on January 12, 2018. “Good Day” has since been played on two Chicago radio stations, Rejoice 102.3 and 106.3 Chicago’s R&B, was featured on a segment on ABC 7 News Chicago, and Fox 32 Chicago used a variation of the song with RJ signing it in a commercial for their new Fox Good Day Chicago marketing campaign that started in December of 2019. The songs positive message also helped earn RJ invites to speak and perform at the Project Outreach & Prevention on Youth Violence Fundraiser, the Developing a Better You Annual Teen Conference, multiple Obama Foundation events, Rainbow Push Coalition events, school assemblies and anti-bullying conferences. RJ is currently working on a follow up EP with a planned release in 2021, but be on the lookout for some new singles, including collabs with other amazing artists, coming later this year!